Securing your treehouse - doors and windows

On the scale of security, plain glass windows are way down there at the lowest of the low. They seem purely designed for people to look inside, see what they could steal, smash through, and climb in.

Therefore, if you have windows on your treehouse, you have a big security problem. Although windows are great for looking through, don't cover every wall with them (unless you live in the middle of nowhere, in which case you wouldn't be reading this anyway). Every window will have to be protected, so the fewer the better. Small double glazed windows are strong due to the air gap between the layers of glass, but large panes can be very expensive and they can still be broken when attacked in the corners. Of course, bullet proof glass has the same properties (physical and financial), but it might be wise to consider cheaper options!

Covering the windows on the outside

This is highly effective if built correctly, but can spoils the look of your treehouse. The idea is to have a lockable cover or thick wire mesh over the window on the outside wall, which can be opened when you visit. The trouble with this is that people might be able to prise open the cover as it will stand out from the wall unless carefully built in.

If you use mesh, or a grid, the window could still get broken, even if people can't get in. However, fixing a window is a lot easier and cheaper than repairing a wrecked treehouse. Any hinges used must be carefully hidden so they are inaccessible when the cover is closed. This system is best for existing windows, but if you are planning to build a new treehouse then you could put the protection on the inside.

Lexan. It is 250x stronger than glass, insulates (hot and cold) better than glass, and can be bought in sheets at the home depot for under $100, depending on size. Lexan comes with a green protective film on it, which is removed at the time of installation, and there is also the cheaper alternative, your standard Plexiglas, which comes with a blue film on it. The Plexiglas alternative is only about $20 a sheet, but is only 10x stronger than glass, and is subject to yellowing and cracking after enough sunlight hits it (about a year).

Security case in point, these things can't be "center-punched" or shattered with rocks, or even a hammer. try it, it's absolutely amazing stuff. These panels seem a bit flimsy on first approach, but once you've securely framed them, they are practically impervious.

Send in your tips

Blocking a window from the inside

I used this method on my treehouse, and it will depend on the type of treehouse you have whether it will suit your windows. It involves separating the main room from the window using a strong door or cover. If you have a separate main door, you can lock the window cover with a simple peg or lock because it can only be locked from the inside. Hinges are easier to fit if the cover is on the inside. When someone climbs up to break in, they will look through the window and see that they cannot get any further. Even if the window is broken, no progress is made on their part.

My treehouse was split into two parts by the window cover. See the description of my treehouse for more info. In this case the cover is a second door. There is the 'weak section', which contains the large Perspex window, and the 'strong section' behind the door. The weak section can be accessed by a door with no more than a simple handle - no lock. It would therefore be pointless even breaking the Perspex, when you could get just as far using the unlocked door. When you come in through the weak door, you are faced with a very strong door with a Yale lock. I built the door stronger than the walls because people will put a lot of effort into smashing a door down, but most don't think about smashing the much weaker walls.

When the strong door is opened with the key, it is possible to unlock the small piece of wall to which it is attached, and fold the door and wall flat against the main treehouse wall (see photographs).

Your roof must be able to comfortably take the weight of at least three people. Even if you are afraid to go out on the roof, in case you fall off, remember that intruders want to get in, and they will not let a little thing like fear of heights get in their way. Put plenty of support beams under plywood sheets for the roof, and use security bolts to hold the sheets down, as for the floor.

Covering the roof with felt or other waterproofing material not only increases rain protection, but also deters people from attempting to remove wood from the roof to make an entrance. If your roof is small, you could cover it with old pieces of wood to stop people getting up and smashing in. Alternatively, you could grow a lawn on the roof (don't laugh!). Lay down plastic sheeting, cover with a thin (3") layer of compost/ soil, and sow ordinary grass seed. This will increase insulation as well, so the treehouse will be warmer in the winter. 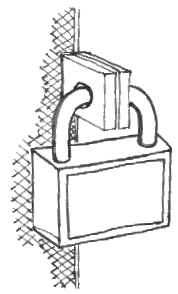 A good door demands respect. Spend time making a really worthwhile door that fits its frame snugly as gaps are good for prising open. Use large hinges, and make sure that you aren't wasting your time using a cheap, insecure lock. Buy big when it comes to locks! They are the single most precious security feature you have. Preferably have two locks - one at the top, and one at the bottom - to protect the door from bending in at the top or bottom corners. Mortice locks are very much stronger than rim/latch locks, and will certainly withstand a good kick or two.

A good suggestion I received was to use a thick metal cover over your padlock and bolt, so that all you can get near to the lock is the key. This way, it is nearly impossible to use a hacksaw, hammer or anything else to attack the lock. I replaced the broken Yale lock on my treehouse with a simple locking method shown in the diagram on the right. It is made out of two half inch thick strips of steel with a hole drilled in one end and screw holes drilled in the other. The screw end of one strip is recessed into the door and screwed in, and the other strip is recessed into the door frame. When the door closes the holes line up and a big padlock can be inserted. Coupled with a metal lock cover, this provides a very effective deterrent.