Creatures in the forest 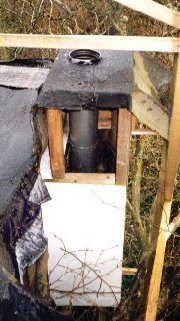 I wasn't the only one to appreciate having this cosy place built high up in the trees of the forest... Over the years the treehouse played host to a selection of woodland animals. Most took up residence inside the paneling that hid the fireplace chimney from view.

The squirrels were hard to keep an eye on. I eventually discovered they were living in the treehouse when I caught one unawares, right after his or her partner had been seen fleeing the beech tree across the thinnest of branches. These squirrels weren't tame and stayed well out of my way when I was around making noise and disturbing the peace.

Crows and other birds

A crow chick was raised at the treehouse in a mish-mash nest of twigs, but moved on quite soon afterwards. Tiny forest birds flitted in and out of the branches catching flies dancing above the roof and deck. The buzzards who patrolled the forest circled around their nearby nest and were often visible on a warm day rising on the thermals.

For a couple of years bats lived in the treehouse and they usually chose the spaces under the roofing felt for their home. At this time I wasn't up there very frequently so they were undisturbed for a long time.

As you may already have read, the treehouse was taken down by the local Country Park. One of their arguments was that I was spoiling the forest for the wildlife that lived there. I couldn't really understand where they were coming from and stated this to them, making the point that the treehouse was providing shelter in the woods and if anything adding to the features already there. Bats are protected in the UK and it is illegal to disturb their nests, but the park removed the treehouse without carrying out a survey to check if anything sensitive was living there.