A treehouse built from scrap wood 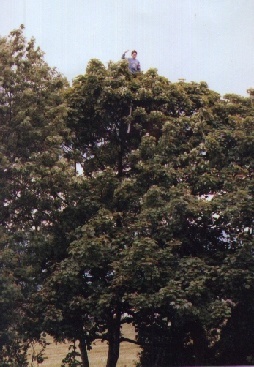 I've built a few treehouses over the years, the most important of which was the one I designed and built in the forest near my house. Before this I had quite a nice little building up in a sycamore tree in the garden. I also helped build a large viewing platform high up a beech tree for a neighbour and put together small temporary platforms to watch over the nearby fields when the farmer was cutting the barley in the summer or ploughing the fields.

The treehouse in the garden was pretty small, based on plans that were little more than general sketches. It was made with reclaimed wood and there wasn't too much of that going around at the time. I fitted a small door and two windows to keep an eye on the world. One night I decided to sleep out there and excitedly got a sleeping bag, pillow, torch and food together for a night in the tree. I finally managed to get to sleep, and it was a very pleasant surprise to wake to the sound of leaves brushing up against the window in the morning breeze.

One thing I particularly liked was that this treehouse was perched near the top of the tree and had an excellent view all around. In the summer, when it was built, it was practically invisible from the ground. I thought this was a great feature until the leaves began to fall. I don't know if you've seen a sycamore tree, but it has big hand-like leaves, similar to a maple. It shares another unfortunate aspect with the maple in that it becomes completely bare in winter time. The treehouse could be seen half a mile away!

This was a bit of a concern from a security point of view and I wasn't keen on having other people breaking in to my treehouse. Eventually, and with much sadness, it was taken down. It wasn't to be the end of my treehouse building days, I decided, so I began thinking up what would come next...

For my next treehouse, I started drawing up improved plans and picking a new, better location. This became my place in the forest.